Wendy O: So I definitely remember #Peercoin was the first PoS, but it was hybrid PoW. I'm also pretty sure #NXT was the first Pure PoS, not $ALGO. Can someone clarify? 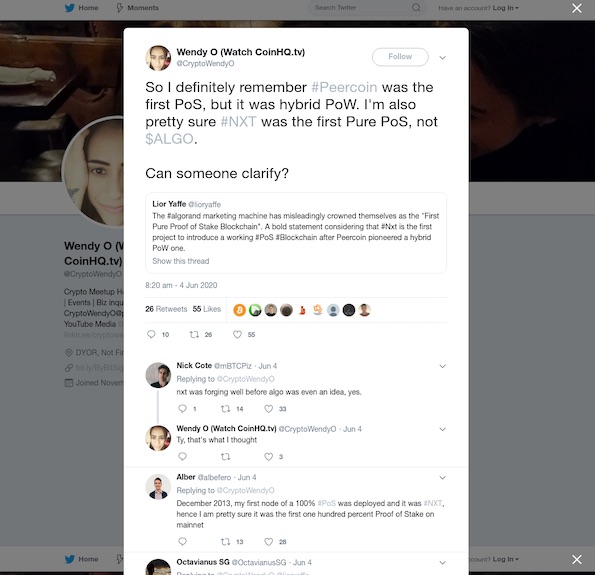 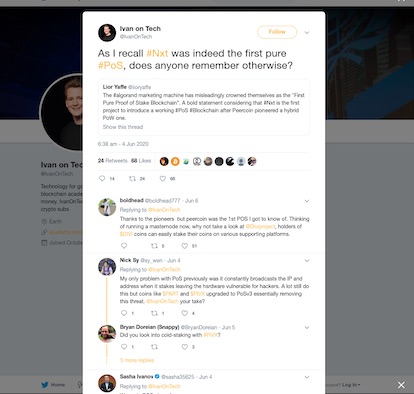 Ivan on tech: As I recall #Nxt was indeed the first pure #PoS, does anyone remember otherwise?

Ihodl: A war of words has erupted over Algorand’s repeated claims to be the world’s first pure Proof of Stake blockchain. As long-time industry observers know, that assertion isn’t remotely true, since enterprise blockchain Algorand only launched in 2017 and PoS has been around a lot longer than that. The first blockchain to experiment with Proof of Stake was Peercoin, which debuted a hybrid PoW/PoS chain. However, the accolade for first pure PoS chain, which Algorand has been so keen to claim, goes to NXT. The Proof of Stake chain launched in 2013 – four years before Algorand shuddered into life. It’s a fact that Jelurida co-founder and NXT core developer Lior Yaffe has been at pains to point out. 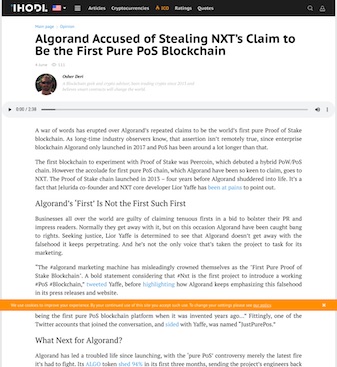 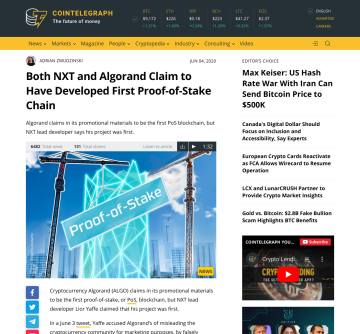 Cointelegraph: Cryptocurrency Algorand (ALGO) claims in its promotional materials to be the first proof-of-stake, or PoS, blockchain, but NXT lead developer Lior Yaffe claimed that his project was first. In a June 3 tweet, Yaffe accused Algorand’s of misleading the cryptocurrency community for marketing purposes, by falsely claiming to be the first PoS blockchain. As Yaffe pointed out in a subsequent tweet, Algorand uses the claim on its official website and in much of its promotional material. He also told Cointelegraph that he believes the information is a lie with malicious intent.

Coincodex: It’s not uncommon for startups to embellish their achievements or for marketers to indulge in half truths. Sometimes such liberties go undetected, but other times they meet fierce pushback. Algorand’s claim that it is the world’s “first permissionless, pure proof of stake blockchain platform” has fallen into the latter category, provoking the ire of developer Lior Yaffe, who points out that NXT was the first platform to implement a pure PoS solution several years ago. Yaffe was an early adopter and core developer of Nxt, and has later co-founded Jelurida - the company powering the NXT and Ardor blockchains. 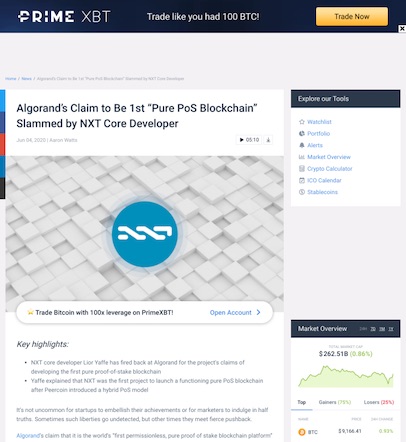 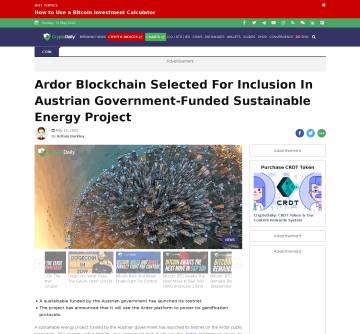 Cryptodaily.co.uk: A sustainable energy project funded by the Austrian government has launched its testnet on the Ardor public blockchain. The project, called HotCity, has announced that it will use the Ardor platform to power its gamification protocols, which help to crowdsource locations that are generating waste heat. Once the source is verified, participants are rewarded for their contribution in digital tokens or vouchers stored on Ardor’s main child chain, known as Ignis.