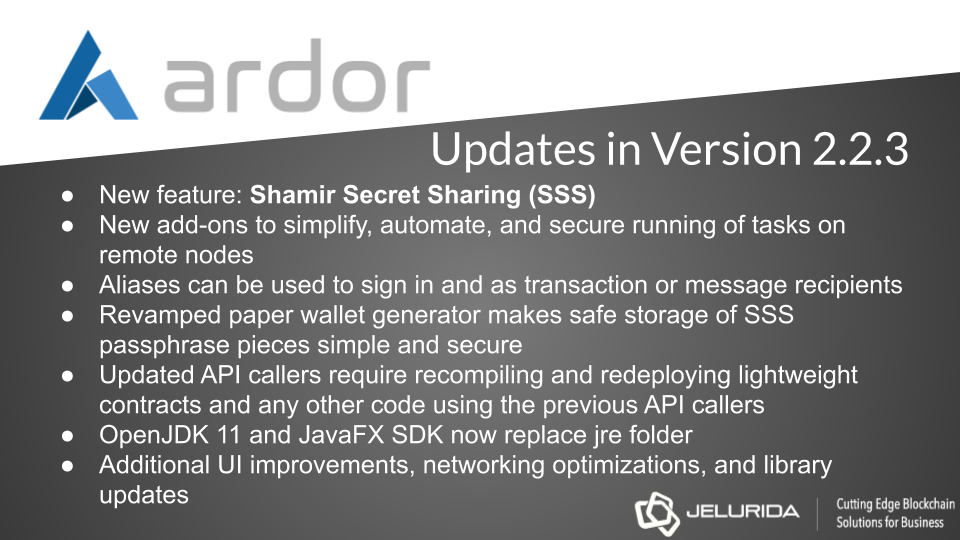 Do you have your full blockchain account number memorized to give to friends and family? Probably not. Now, easy to remember Ignis aliases can be used to log in and as recipients of transactions on the Ardor platform.

To get started, simply use your existing account to log in to the Ardor blockchain and navigate to Ignis, then purchase your alias for a nominal one-time fee. In moments, you will have your own alias to send to friends and business partners to simplify the transaction process. Long alphanumeric account numbers are a thing of the past.

Passphrase Security Gets an Upgrade with Shamir Secret Sharing (SSS)

Many businesses and consumers remain skeptical of using blockchain because they do not trust the idea of a private key that, if stolen or lost, results in losing access to funds. In response to this sentiment, Jelurida has natively integrated Shamir Secret Sharing (SSS) for securing passphrases.

SSS is a simple and rigorously tested cryptographic solution initially developed in 1979 enabling a passphrase to be split into multiple pieces, of which only a set proportion of pieces must be combined to sign a transaction. For example, a passphrase can be split into five pieces of which only two are needed to sign a transaction. The updated Ardor paper wallet generator with QR codes makes storing these new private keys secure and easy.

The utility of this elegant solution cannot go understated. You can now effectively communicate with remote nodes and combat key loggers by copying and pasting a piece of your private key that is stored in a password manager and then scanning the QR code of another piece. If one piece of a private key is lost, you can simply substitute one of the other pieces to sign a transaction.

For a safe backup, you can split the passphrase into 4 pieces, of which any 3 can be combined to recover it, print them out, and hide them in four different places (or give to four trusted friends). If you forget your passphrase, or something bad happens to you, any three of those paper wallets can be used to recover it. If one piece is lost or stolen, your funds are still safe.

Jelurida’s blockchain research laboratory in Lugano, Switzerland was recently fitted with a load testing facility to push the limits of what the Ardor and Nxt blockchains can handle. In ongoing testing of the 2-second block times recently introduced on testnet, the Ardor platform has been stably supporting an average of 130+ transactions per second for more than seven days. The research is ongoing, but as of Thursday, April 25, Tomislav Gountchev, Lead Software Architect at Jelurida, provided the following update on slack:

“This (130+) is the total of all transactions on all 4 child chains plus the parent chain. Transactions are broadcasted by multiple threads (currently 60 in parallel) to four servers, each forging and bundling with different accounts. In a real production system, we would put limits on how many transactions can fit in a child block, but for the purpose of the load test there were no such limits so the bundlers and forgers would just create blocks with as many transactions as currently happened to be in the unconfirmed pool. We are at 80M total transactions now... “

Initial insights from this testing have allowed the team to include several key networking and connectivity optimizations in the Ardor 2.2.3 release.

The points noted above are only a small sample of the updates included in the most recent release. Download the Ardor client today and review the changelog for more details.