In a Telegram posting dated 01.08.2018 Victor Konovalov - the Director of Apollo Currency – has claimed that Nxt is an official partner of Apollo: 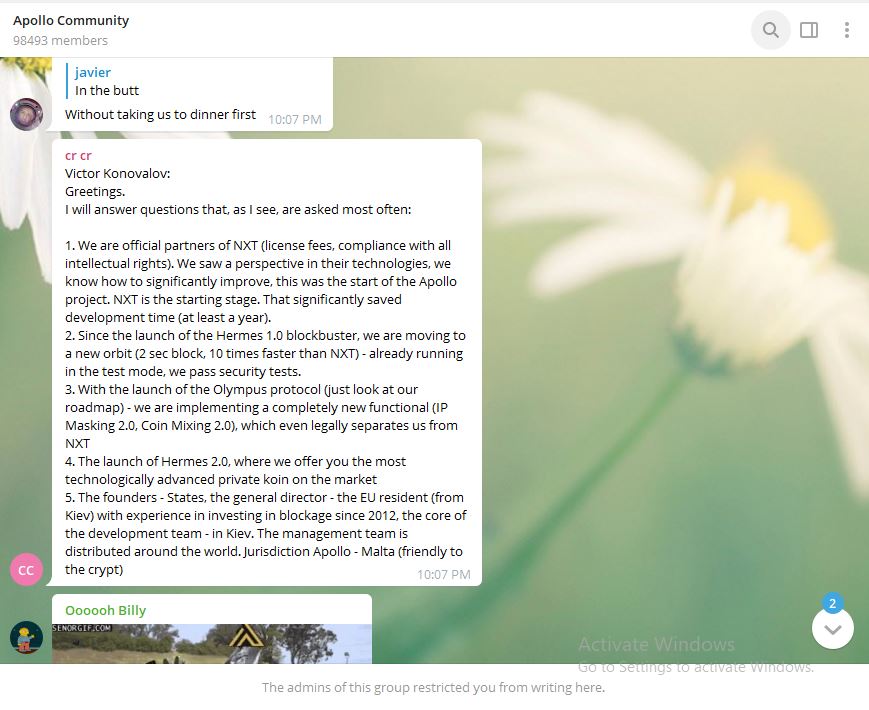 Please note that since its launch on January 14, 2018 Apollo Currency has been using the Nxt blockchain technology of Jelurida. Therefore, Apollo Currency, simply being a clone of Nxt, has to comply in full with the applicable Jelurida Public License (“JPL”) – something Apollo Currency initially failed to achieve.

UPDATE: As of Aug 5, 2018, we confirm that the copyright violations have been corrected. It took four C&D letters, and this public notice, to finally enforce our IP rights.

The original text of our public notice regarding their violations has been preserved below:

However, despite our best efforts and patience in trying to resolve this matter, Apollo Currency is still in violation of the JPL and in particular Apollo Currency fails:

Our first letter to Apollo, dated June 11th, is available as a pdf file: First Cease and Desist Letter from Jelurida to Apollo Currency. It was followed with three more cease and desist letters, still with no satisfactory resolution as of today.

The position of Jelurida is and has always been that projects are allowed to use the Nxt software in order to create a public Nxt clone, but solely under strict compliance with the JPL. Jelurida clearly has a great interest in the enforcement of the JPL, in order to protect its IP rights and the interests of its projects and community. This does not solely apply to the current case, but also to any other use of the Jelurida technologies by any third parties.

Jelurida will also ensure that any entity claiming to be an Apollo partner is made aware of the license violations by Apollo and of the fact that they have no right to distribute derivatives of Nxt software under any license other than the JPL. An official notice to Vimana Global has already been sent.

Jelurida has given Apollo Currency (more than) enough time and opportunity to comply in full with the JPL. If Apollo Currency continues to infringe the JPL, Jelurida is determined to ensure, using all necessary legal means, that the use of its technology by Apollo Currency becomes fully aligned with the terms of the JPL.

After careful examination of the Apollo software, Jelurida also felt compelled to issue a public warning, exposing the total lack of privacy in the purportedly "private" transactions advertised by Apollo: Beware of Fake "Private" Transactions