Bitswift to Join the Ardor Platform as a Child Chain

Jelurida BV (https://www.jelurida.com), the holder of intellectual property rights for Nxt (https://nxtplatform.org) software and the Ardor platform (https://www.ardorplatform.org) today announces that Bitswift (http://www.bitswift.info) will be added to Ardor, a blockchain-as-a-service platform that allows organizations to create a blockchain without worrying about development or network security. The Ardor platform comes pre-fitted with the numerous features found on the Nxt blockchain today, such as the ability to run blockchain-based polls and create additional tokens known as assets, in addition to having all transactions secured by the parent Ardor chain. Bitswift joins Ignis in the first batch of child chains to be launched when Ardor is released later this quarter.

Bitswift is a combination of companies and an online community that work together to promote healthy digital lifestyles. It is represented by Bitswift Technology Solutions Inc (http://www.bitswift.tech), which deals with the physical expansion and brand recognition through Bitswift.tech reps who provide technology solutions to various businesses in the Toronto area, and Bitswift Decentralized Applications Inc, which deals with the activities of its online community. The team is also actively working on Bitswift.store, an upcoming online electronics store that accepts cryptocurrencies like BTC, IGNIS, NXT, and its own token.

To prepare for the launch of its child chain, Bitswift will be allowing users on their own blockchain to swap their coins for an equivalent amount of the Bitswift Asset (asset id: 12034575542068240440) on the Nxt blockchain later this month. As part of the Ardor Genesis Snapshot, Jelurida will record the Bitswift asset balances and allocate Bitswift child chain coins at 1:1 ratio, to the same accounts on the Ardor platform. Bitswift users will be able to re-use their NXT passphrase to access their account on Ardor. Further details about the swap will be announced by the Bitswift team in the coming weeks.

Paul Busch, Founder of Bitswift:
Bitswift wants to ensure the security and longevity of their tokens. By migrating them to a secure blockchain infrastructure such as Ardor, the Bitswift team can focus on utility applications for the Bitswift tokens rather than on blockchain infrastructure dealings which is a beast of its own. Through migrating to the Ardor platform we inherit a wealth of options for our tokens, most notable a fully featured API from which we can build out applications to provide extended utility for our tokens.

Lior Yaffe, Managing Director of Jelurida B.V.:
We are excited to see more and more organizations interested in using Ardor. With Bitswift taking the leap and being the first confirmed child chain to join Ignis, we are sure this will encourage others to use Ardor as infrastructure for their decentralized applications, whether as a child chain, an asset, or through one of the many features publicly available on the Ignis child chain.

Paul Busch also announced that he will be giving away 10% of all Bitswift tokens to all holders of Ignis coins, relative to the amount of Ignis coins they are allocated at the time of the Ardor Genesis Snapshot. However, all funds for this 10% giveaway will come from Paul’s own personal funds. Bitswift does not intend to compete with Ignis as a child chain, but rather to complement the entire platform. Additionally, further customized development will be explored that will not only differentiate the two chains, but also provide the needed customizations that Bitswift requires. Some features will also be disabled due to business reasons as requested by Bitswift.

Jelurida and Bitswift are also expressing their gratitude to the Nxt Foundation for its help and mediation which made this collaboration possible.

About Jelurida
Jelurida sells licenses for private blockchains based on the Nxt and Ardor software, makes customized commercial versions of these blockchain platforms, and provides consulting services for customers licensing its software. Using a dual-license business model, Jelurida continues to support and maintain the decentralized public blockchains. You can learn more about Jelurida at jelurida.com.

About Bitswift
Bitswift is a combination of companies and community working collectively together to promote healthy digital lifestyles. Bitswift Technology Solutions Inc deals with physical expansion and brand recognition through Bitswift.tech reps, while digital dealings are mostly token and online community related and handled by Bitswift Decentralized Applications Inc. In short Bitswift is a B2B / community token with physical presence. You can learn more about Bitswift at bitswift.info. 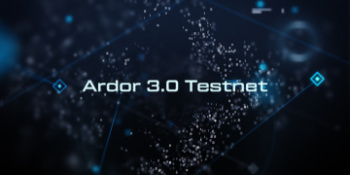 The first release of the Ardor pruning and snapshotting feature is now available. Running on a new testnet, the 3.0.0e version can be installed by anyone who wants to join the testing of the revolutionary Ardor solution to the blockchain bloat problem.